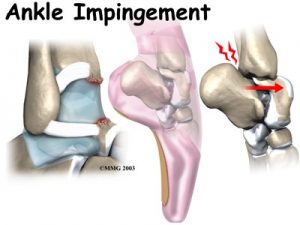 The ankle joint is formed where the bones of the lower leg, the tibia and the fibula, connect above the anklebone, called the talus. The tibia is the main bone of the lower leg. The fibula is the small, thin bone along the outer edge of the tibia.

The ankle joint is a hinge that allows the foot to move up (dorsiflexion) and down (plantarflexion). The ankle is a synovial joint, meaning it is enclosed in a joint capsule that contains a lubricant called synovial fluid. 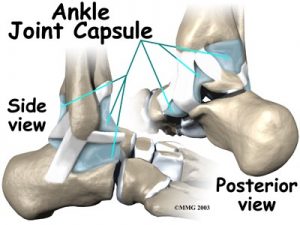 The talus rests on the the heelbone (the calcaneus). The joint formed between these two bones is called the subtalar joint. The calcaneus extends backward below the ankle, forming a shelf on which the talus rests. 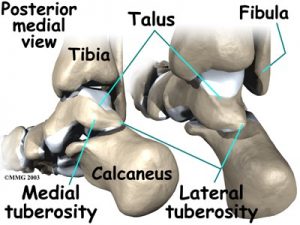 Two small bony bumps, called tuberosities, project from the back of the talus, one on the inside (medial) edge and one on the outer (lateral) edge. 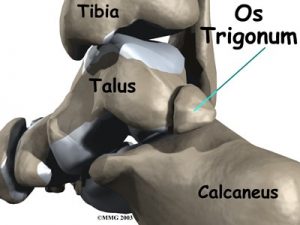 In some people the lateral tuberosity is not united to the talus. The separate piece of bone is called an os trigonum. This separation of the os trigonum from the talus is usually not a fracture. About 15 percent of people have an os trigonum. An os trigonum sometimes causes problems of impingement in the back of the ankle. 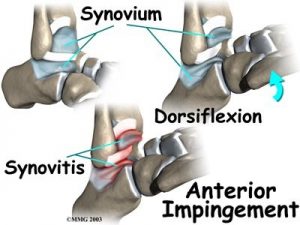 Irritation in the lower edge of the AITFL and the front of the ATFL can thicken these ligaments. The irritated ligaments become vulnerable to getting pinched between the tibia and talus as the foot is dorsiflexed. These ligaments may also begin to rub on the joint capsule of the ankle. This can inflame the synovial lining of the capsule, a condition called synovitis.

A similar problem can happen after an ankle sprain. As the torn or ruptured ligament heals, the body responds by forming too much scar tissue along the front and side of the ankle joint. This creates a small mass of tissue called a meniscoid lesion. Dorsiflexing the ankle can trap the tissue between the edge of the ankle joint, causing pain, popping, and a feeling that the ankle will give out and not support your body weight. 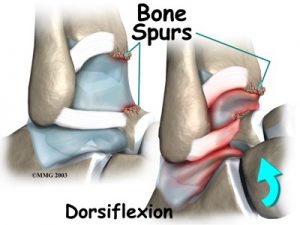 Over time, damage from past ankle sprains may also lead to the formation of small projections of bone called bone spurs. Bone spurs can form along the bottom ledge of the tibia bone or on the upper surface of the talus. As the ankle hinges into dorsiflexion, the bone spurs may begin to jab into the soft tissues along the front edge of the ankle joint, causing symptoms of anterior impingement.

Posterior impingement occurs in the back of the ankle. It is most common in ballet dancers who must continually rise up on their toes, pointing their foot downward into extreme plantarflexion. Other athletes are rarely affected but may have problems if they routinely plantarflex their feet. 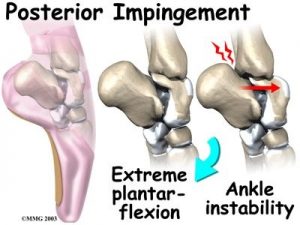 The usual cause of posterior impingement is an os trigonum (described earlier). This normal fragment of bone is a separation of the lateral tuberosity from the talus. When an os trigonum is present, it can cause problems, especially among ballet dancers who constantly rise up on their toes into the dance position called pointe. Pointe is a position of extreme ankle plantarflexion. As the foot points downward sharply, the os trigonum can get sandwiched between the bottom edge of the tibia and the top surface of the calcaneus (the heelbone). This can trap the tissues above and below the os trigonum, leading to symptoms of posterior impingement.

Posterior impingement can also occur in a ballet dancer who has had a previous ankle sprain. Damage from the past ankle sprain may create too much instability in the ankle. As the dancer rises up on the toes, the talus may be free to slide forward slightly. This allows the shelf of the heelbone to come into contact with the back of the tibia, pinching the soft tissues in between. Posterior impingement from ankle instability can also happen in other athletes. But this is uncommon, because forceful plantarflexion is rarely required in other sports. 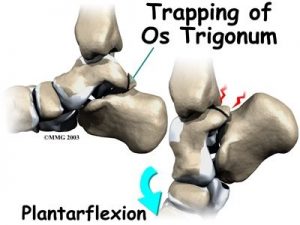 Anterior impingement may feel like ankle pain that continues long after an ankle sprain. The ankle may feel weak, like it can’t be trusted to hold steady during routine activities. When anterior impingement comes from ligament irritation, pain and tissue thickening are usually felt in front and slightly to the side of the ankle. This is the area of the ATFL. The pain worsens as the foot is forced upward into dorsiflexion. If the ligaments have irritated the synovium of the ankle joint capsule, throbbing pain and swelling from inflammation (synovitis) may also be felt in this area. 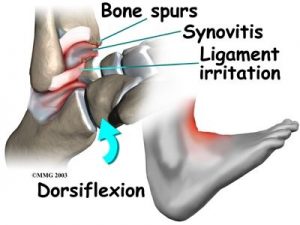 Symptoms of posterior impingement include pain behind the heel or deep in the back of the ankle. There is usually tenderness just behind the bottom tip of the fibula, by the outer ankle bone. Pain is usually worse when the foot is pointed down into plantarflexion. A painful clicking sensation may also be felt as the foot is twisted in and out. 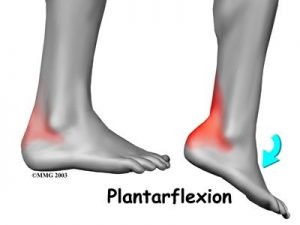 If the doctor believes that pinching in the back of the ankle is from an os trigonum, a numbing medication may be injected into this area. If it feels better, the problem is a posterior impingement from the os triogonum. If the pain doesn’t change, the problem could be in the tendon that runs along the inside edge of the os trigonum.

The doctor will probably order X-rays if impingement is suspected. X-rays can show if there are bone spurs on the tibia or talus. In cases of posterior impingement, an X-ray can show if an os trigonum is present. You may be asked to squat down or rise up on your toes during the X-ray. This helps show if impingement is due to bone pinching the soft tissues.

A bone scan may be recommended in select cases, such as when surgery is being considered. In general, MRI scans are not helpful for impingement problems, but they may be ordered to check for other ankle problems that could be causing your pain.

You may be told to rest the ankle for a short time to reduce swelling and pain. A special walking boot or short-leg cast may be recommended to restrict ankle movement for up to four weeks. Mild pain medications and anti-inflammatory medicine, such as ibuprofen, may also be prescribed. An ice pack can also help alleviate swelling and may encourage a faster return of normal ankle movement.

Your doctor may recommend a steroid injection into the painful area. Steroids are strong anti-inflammatory medications. Asteroid injection can help relieve irritation and swelling in the soft tissues that are being pinched, reducing their tendency to get pinched.

Your doctor may suggest that you work with a physical therapist to help you regain normal use of your ankle. Patients often progress in a series of exercises including stationary cycling, range of motion, and ankle strengthening.